Mexico is an attractive marketplace in the horticultural sector

Success all along the line: From 18 to 20 September 2019, the latest foreign cooperation of the world's leading horticultural trade fair - "Ornamental, Plants & Flowers MÉXICO powered by IPM ESSEN" (OPF) - celebrated its premiere in Mexico City. Around 120 exhibitors from 12 nations presented their products and services in the fields of plants, innovative horticultural technology, floristry, landscaping and horticulture on around 9,000 square meters at OPF. Around 10,000 trade visitors from 14 countries took the opportunity to visit the first international trade fair for horticultural production in Mexico.

"We can look back on a successful first event. The interest in horticulture in Latin America is impressive. With OPF, we have succeeded in giving the sector another top-class platform. Especially the participation of German exhibitors and visitors was remarkable," says Oliver P. Kuhrt, CEO of Messe Essen. With its proximity to the USA - one of the largest consumer markets for horticultural products, Mexico is an attractive location and Germany's most important trading partner in Latin America. In addition, the country with its different climate zones offers ideal production conditions for a large number of plants throughout the year. The free trade agreement between the European Union and Mexico which has been in place for several years also supports trade between the two continents.

A total of 118 exhibitors presented their products on an area of 8,900 square meters. Germany and Sri Lanka presented themselves impressively in official national pavilions with the support of the respective ministries. The 9,642 visitors from Chile, Costa Rica, Germany, Guatemala, Japan, Canada, Colombia, Mexico, Nicaragua, the Netherlands, Peru, Spain, Sri Lanka and the USA impressively demonstrated the need for a separate trade event for the green sector in Mexico.

The great importance attached to OPF was already demonstrated by the lively political support in advance and, in particular, by the participation in the opening ceremony: In addition to the German Ambassador Peter Tempel, the Dutch Ambassador Margriet Leemhuis and representatives of the Mexican Ministry of Agriculture as well as of the Japanese Embassy, Johannes Graf as a representative of the Federal Ministry of Agriculture and the Governor of the Mexican state Morelos Cuauhtémoc Blanco Bravo also took part.

On the day before the opening of the fair, international exhibitors and visitors were given the opportunity to gain their own impressions of the local companies during a guided tour of the production areas within the state of Morelos, Mexico's largest plant cultivation area. In addition to visiting two production plants, contacts to invited representatives of the authorities were established during lunch. The participants praised the excellent quality of the exclusive networking offer. Particularly pleasing: Some of the negotiations initiated during the tour were brought to a successful conclusion during the course of the fair.

Supporting program at a high level

On all three days, OPF was accompanied by a top-class trade fair program: top international florists, including the German floral designer Gregor Lersch who has won several international awards and six other top florists operating worldwide, demonstrated their skills and shared their knowledge in workshops. On the second day of the fair, the current legal situation for plant producers in Mexico and the rights of international licensors were extensively examined as part of the "Breeders Rights Seminar". As part of OPF, "BonsaiMex", the most important national exhibition for the garden art of miniature trees, enriched the fair with a series of splendid specimens of artistic shrubs and trees. At the first Mexican Floral Art Cup, the young florists demonstrated their talent with the support of the Latin American School of Flower Art (EIAF) and the international florist organisation Florint.

The dates for the second edition of "Ornamental, Plants & Flowers MÉXICO powered by IPM ESSEN" have already been set: From 17 to 19 November 2020, the continuation of the successful premiere will take place again at the Centro Citibanamex in Mexico City. 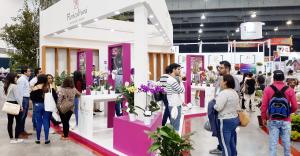