The FDF World organized by the Trade Association of German Florists in Hall 1A / Green City is the meeting point for the national and international world of florists at the world's leading fair for horticulture, IPM ESSEN. In its spacious inspiration area, the association presents a large number of live shows, product presentations, marketing concepts for the retail flower trade, competitions and open floristry workshops. Via its FDF GmbH, the association also acquires and looks after the exhibitors with floral requisites at IPM ESSEN. FDF and Messe Essen have now reaffirmed the continuation of this trustful partnership by signing a follow-up contract during the last IPM ESSEN in January 2020.

The CEO of Messe Essen, Oliver P. Kuhrt, and the FDF President, Helmuth Prinz, signed a new five-year contract which constitutes the basis for the continuation of the partnership.

"The position of the Trade Association of German Florists as the partner of IPM ESSEN is being reaffirmed with the signature on the cooperation contract. IPM ESSEN is being strengthened as the international meeting point for florists from all over the world," the FDF President, Helmuth Prinz, expressed his pleasure after the contract had been signed by both parties.

Oliver P. Kuhrt, CEO of Messe Essen, added: "We are very pleased that, in the Floristry area, IPM ESSEN will also continue to have a creative partner from the sector at its side. Every year, FDF sets up an impressive program so that the Green City becomes a magnet for florists from all over the world." 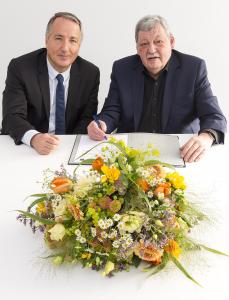