Promoting public greenery together: IPM ESSEN and Haymarket initiate delegation trip with the city of Essen

Parks have been popular places for leisure and recreation at least since the Corona pandemic. According to a recent study, the time spent in green spaces has doubled since 2019. In order to promote public green spaces, the Grugapark Essen and the Thenford Arboretum in England want to exchange ideas with Essen's Lord Mayor Thomas Kufen and other representatives of the city and the green sector during a delegation trip. What the two green spaces and their home cities have in common and what they can learn from each other will be discussed in England on 23 and 24 May 2022. The initiators of the trip are the International Plant Fair IPM ESSEN and Haymarket Media, one of the most important publishing houses of the green industry in Germany.

"We have a long partnership with Messe Essen, which is in close contact with the neighbouring Grugapark. We as Haymarket Media and publisher of TASPO have a direct connection to Thenford Arboretum through our publishing founder Lord Michael Heseltine. The idea of bringing all those involved together was obvious and close to our hearts, so that we consequently undertook a delegation trip to England together with the city of Essen", Uwe Schütt, Managing Director of Haymarket Germany, explains the background to the trip. Oliver P. Kuhrt, CEO of Messe Essen, adds: "As the world's leading trade fair for horticulture, we see ourselves as having a share of responsibility when it comes to promoting the exchange about public green spaces. We have an excellent international network, which we are now using once again to promote horticultural topics."

Thomas Kufen, Lord Mayor of the City of Essen: "The City of Essen and the topic of green belong together. Whether it is Europe's Green Capital, host of the world's leading trade fair IPM ESSEN or also organiser of the International Garden Exhibition IGA 2027 - we have concentrated competence in sustainability. We are constantly expanding this competence and are open to new impulses. The trip to England gives us the opportunity to get to know other concepts and at the same time to make our own projects better known in the world."

A red maple for the Thenford Arboretum

In addition to Lord Mayor Thomas Kufen, other members of the jury include Simone Raskob, Head of the Department for Environment, Transport and Sport of the City of Essen, Melanie Ihlenfeld, Head of the Green and Gruga Department, Eva Kähler-Theuerkauf, President of the NRW Horticultural Association and Chairwoman of the IPM Trade Fair Committee. and Chairwoman of the IPM Advisory Board, Christoph Dirksen, Chairman of the North Rhine-Westphalia Nursery Association in the Association of German Nurseries and Member of the Management Board of Wilhelm Ley GmbH, as well as Uwe Schütt and Oliver P. Kuhrt were among the participants of the two-day delegation trip. A red maple of the Acer rubrum Redpointe ® variety is to be planted in the Thenford Arboretum as a symbolic gift. The tree is donated by the North Rhine-Westphalia Nursery Association and the Ley Nursery. "We are very supportive of international exchange and would like to continue promoting it in the future. Only together can we advance the green sector with good ideas. The tree as a sign of growth and renewal is a reminder of this. It will make the park happy for centuries to come with its robustness, beautiful growth and colourful autumn colouring," says Dirksen.

Lord Michael Heseltine, founder of Haymarket Media Group, former Deputy Prime Minister of the United Kingdom and a Vice President of the Royal Horticultural Society and his wife, Lady Heseltine, created the 35-hectare Thenford Arboretum in the 1970s. It is situated near Banbury between Birmingham and London. The arboretum is part of Haymarket's horticultural activities and since 2002 the general public has been allowed to enjoy the more than 5,000 trees, shrubs and perennials. Just as in the Grugapark, the centrepiece is a botanical garden. Lord Heseltine, who has visited IPM ESSEN and Grugapark in 2007, is looking forward to the announced visit: "We love being hosts and are happy when we can provide our guests with ideas and enjoy receiving new ones in return."

IPM ESSEN is a long-standing headline sponsor of the TASPO Awards, which are presented in Berlin at the end of the year and honour outstanding achievements in horticulture. The world's leading trade fair for horticulture and the newspaper for the green market want to continue their cooperation in the future. The signing of the contract will therefore also be part of the trip. 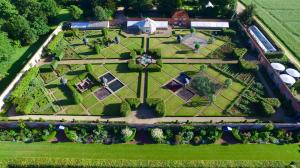